Regrets: Your Secret to a Well-Lived Life

Of all the things I fear (spiders, needles, people seeing my toes, rejection… the list goes on but I’ll spare you the gory details here), regrets are what strike the very most fear into my chickenhearted soul. I have a not-inconsequential sense of mortal dread about getting to the end and feeling ruefully disappointed — not so much by the life I lived, but by the life I didn’t live.

At least I know I’m not alone. One of the modules in my online course (launching again in September — mental note that!) is called “Regrets: Those Little Assholes,” and I hear from more participants in that section than almost any other with poignant, moving tales of the coulda, shoulda, woulda ilk. (A lot of people also reach out in the “Date with Death” module, and I’d reach out too if I was asked to go chill out in a cemetery.)

Regrets aren’t always assholes, though. They can motivate us to change our behavior and better the circumstances of our lives. Defined as the negative emotion born from our awareness of what could have been if we’d only made a different decision with the benefit of 20/20 hindsight, Mark Twain was spot-on that we’re more likely to regret the things we didn’t do than the things we did (and just wish we did so much better, with way better hair). Here’s his pulse-quickening quote: “Twenty years from now you will be more disappointed by the things that you didn’t do than by the ones you did do. So throw off the bowlines. Sail away from the safe harbor. Catch the trade winds in your sails. Explore. Dream. Discover.” This makes me almost willing to wear horizontal stripes and become a sailor.

Regrets based on inactions (like not taking that big job in Seattle, not starting that side hustle, or letting your secret high school flame become the one that got away) tend to haunt us, mostly because these paths not taken represent gaps between our actual selves and what we’ve envisioned as our ideal selves (the versions of us that have their shit together and makes hopes and dreams and goals come true).

What does the wisdom of old age have to bestow upon us?

Our eighth and final stage of being alive, according to Erikson’s stages of development, is known as the ego integrity versus despair stage — full of good stuff like seeking wisdom, feelings of fulfillment, and a sense of rocking-chair contentment. Erikson believed that despair was inevitable for those guilty about the past, looking back with the wistful belief that they didn’t reach the goals they had set forth or dreamed about. Conversely, ego integrity (and maturity) is achieved for those with the conviction they’ve lived their lives well. If you kicked the bucket during your sleep tonight, would you say with conviction that you’d lived your life well?

Studies show that hospice patients are often consumed by missed opportunities and perceived shortcomings, with little or no time to rectify the missteps on their near-term deathbeds. I guess it’s kind of hard to travel to Greece, go back for that graduate degree, or make amends with your brother when you’ve got one foot in the grave.

What do we regret the most?

Researchers gave The Life Revision Index — a questionnaire designed to ascertain how retired people would spend their time if they had the chance to live their lives over again — and learned that more than 70% of the study participants would have spent much more time pursuing their education, more than 60% would’ve spent more time doing things that brought them joy in life, and unsurprisingly, over 75% of the respondents said they’d have spent less time worrying about work if they had a life do-over. (I’m not sure about the mental health of the 25% who didn’t regret worrying about work. Something’s fishy there, right?)

Proportionally speaking, here’s where our regrets sit (according to regret researchers, who really do exist): Why regrets are so valuable

Regret is actually the best of the worst; studies show we value regret substantially more than any of the negative emotions, perhaps because we innately grasp its functional value to help steer our decisions. (We value jealously the least, in case you were curious. Blind rage was not on the list.) This insight offers tremendous potential for how we opt to shape our lives. Anticipating regrets before they fully develop gives us a shot at a life we’ll feel proud to call our own. (Can I call them pre-grets and not sound embarrassingly corny?) (No? Okay. Got it.)
Check out this list of common regrets (originally from this study) and identify which ones feel dodgy to you: 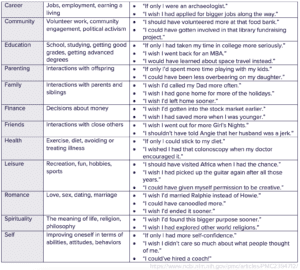 So now what? Using regrets to your advantage.

Thinking about our regrets-in-the-making, and course-correcting along the way to prevent them from manifesting — that’s a recipe for a well-lived life. You know what else is? Reflecting on our no-way-out-alive, inevitable death — because it forces us to be careful. Given that life isn’t long enough for a slew of do-overs, we’re best served to identify our most pressing wants and create a sense of urgency to take action on them. We risk getting to our end of days and facing the stark realization that we spent our time pursuing the wrong things, instead of the goals that might have given us a shot at even more joy. Bronnie Ware writes in The Top Five Regrets of the Dying that, “most people had not honored even a half of their dreams and had to die knowing that it was due to choices they had made, or not made.” It’s this deathbed fear that prompted me to start Four Thousand Mondays; the idea of dying with a dream stuck inside me might have actually killed me.

You know what might kill you? Not knowing what Ware cited as the #1 regret in the palliative care patients she treated. Ready? These dying folks wished they had the courage to live the lives they wanted for themselves, not the lives others wanted for them. (I’ll just let that one simmer for a sec.) Might you regret living a life that’s designed to live up to someone else’s expectations? Might you shudder near the end for not living with integrity to what you really want for yourself?

An unflinching awareness of your half-baked regrets (and of course your pending death, because everything leads to death, friend) can subtly shift you into a more vital state of being. Tapping into your potential regrets can even change the trajectory of your life. We’re not here to dwell on what you’ve already messed up (yeah, maybe you really should’ve asked Cindy to prom) — because all we have is now. We might not even have tomorrow! All you have is now and a bunch of regret-free choices to make until you’re six feet under.

What pangs of regrets do you already feel in your life? What paths have you yet to take that you know will lead to regret if you don’t reorient yourself? Cue this Turkish proverb here: “No matter how far you have gone on a wrong road, turn back.” Turn. Back. Today.

One more quote, or I know I’d regret it: “Of all sad words of mouth or pen, the saddest are these: it might have been.” – John Greenleaf Whittier